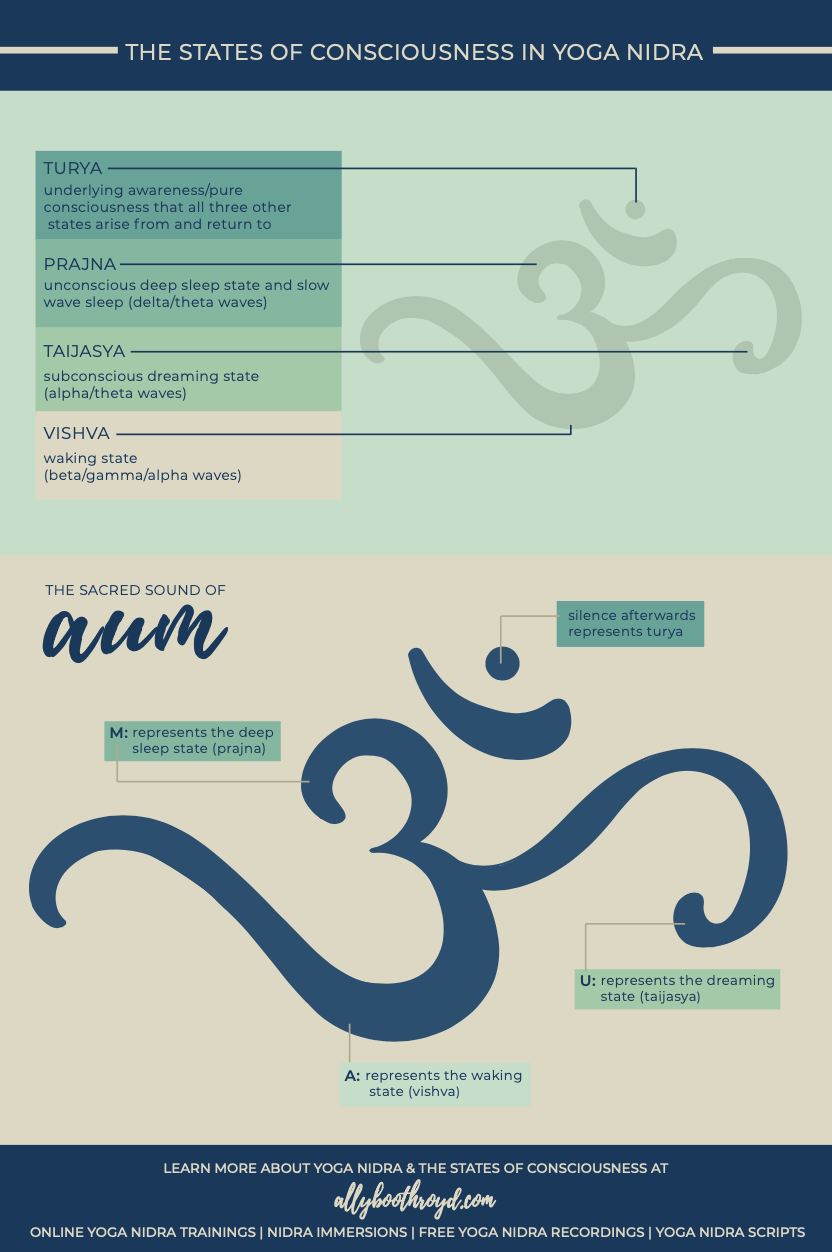 In this post we are going to explore the states of consciousness as discussed in the Mandukya Upanishad and how they relate to Yoga Nidra, the human brain waves, and the sacred sound of AUM.

The first syllable, "A" relates to the the first state, Vishva which is the waking state. In this state, we are in a "path-duration-outcome" mode and high frequency - low amplitude brain waves (BETA) due to processing huge amounts of sensory information.

The second syllable, U relates to the second state, Taijasya which is the dreaming state (REM sleep) in which high frequency and desynchronized brain waves are present and one is processing the inner content of the mind – emotions, experiences, memories, etc.

The third syllable, M relates to the third state, Prajna which is the dreamless sleep (Non-REM) – Slow-wave sleep that is synchronous and allows for tissue regeneration, healing and cellular repair to occur. This is also when the glymphatic system engages to clear away debris and toxins there accumulate between neurons in the brain. The glymphatic system is a network of vessels that clear waste from the central nervous system. In this state Theta & Delta brain wave states are present.

Turiya is described in Verse 7 of the Mandukya Upanishad in Verse VII as amātra, the 'immeasurable' or 'measureless' and being synonymous with samādhi. Translations of samādhi vary, and interpretations range from "bliss" to "liberation" and even "enlightenment." In yoga, samādhi is said to be a state in which individual and universal consciousness unite. A blissful form of total meditative absorption or Union. Turiya is also described not as a fourth state, but as THE state that all 3 other states arise from and dissolve back into. Yoga Nidra opens the door to this state of Turiya which is likely why some refer to the state of Yoga Nidra as "passive samādhi".

The state of Yoga Nidra is being studied more and more and it is now known that it is a unique state of consciousness where deep sleep - slow wave delta brain waves are present simultaneously with alpha (meditative) brain waves. This state has also recently been given a contemporary scientific name: non-sleep-deep-rest/NSDR. 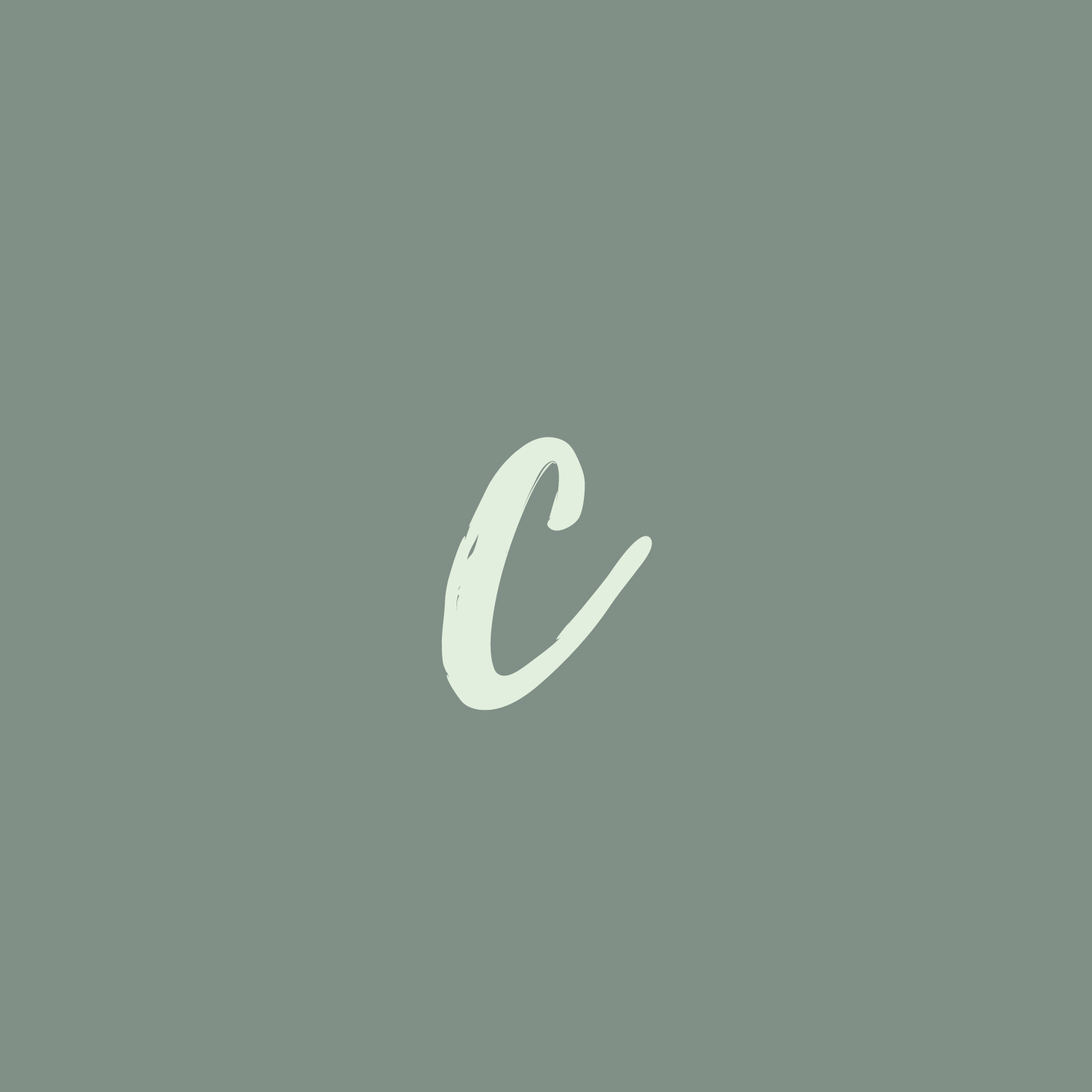 "I really enjoyed learning yoga nidra with Ally and Tiina. This course was a wonderful follow-up to my 200hr YTT, as we delved deeper into the study of the koshas. The Eastern teachings were nicely balanced with new scientific findings that (unsurprisingly) support the ancient teachings. Ally loves to "geek out" (her words!) on this kind of thing and is enthusiastic about her work. Ally is a wonderful teacher of yoga nidra and a great teacher of teachers. She encourages you to "do things before you are ready" and to try things with a "beginner's mind" so that you can overcome perfectionism and prove to yourself that you can do it, even if you are not confident (and you become more confident in that process). I also appreciate the encouragement to connect with with other course students, and now have many new "yoga friends" in my network as a result. I am so blessed to be able to pass on the gift of yoga nidra to my students, friends, and family. Thank you Ally and Tiina for another great experience."

Know that some Nidra teachers will speak more from the Advaita Vedanta's description of the states of consciousness:

The first state is the waking state which is referred to as jagrat (vishva above), in which one is awake and aware of the world and perceiving and moving through the world (path-duration-outcome functions in the brain). This is the state of the gross body (annamaya kosha.)

The second state is the dreaming mind which is called svapna (taijasya above) and this is the state of the subtle body (pranamaya kosha.)

The third state is the deep sleep state which is called susupti (prajna above) which is the state of the causal body (anandamaya kosha.)

Advaita points to the fourth state of Turiya which some describe as pure consciousness as the background which underlies/transcends the three common states of consciousness.

"Waking, dreaming and deep sleep states are where duality is experienced, for the experiencer is different from the experience. But the fourth state, Turiya, is a nondualistic state which is compared to the silence into which one is led by Aum."  - Swami Rama 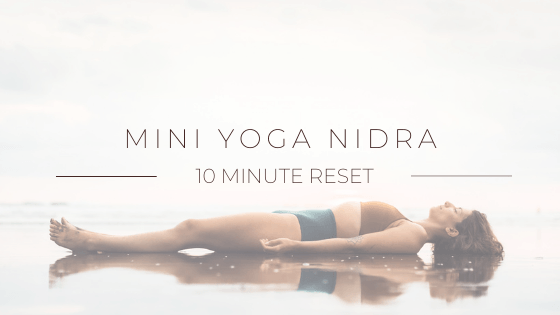 Turiya is also a synonym for samādhi,  the state of liberation, that is free from the dualistic experience, the state of oneness with all that there is.

It's said that the Turiya state is where "the foundational Self is realized, it is measureless, neither cause nor effect, all pervading, without suffering, blissful, changeless, self-luminous, real, immanent in all things and transcendent."

Know that these four states of consciousness are already a part of you already and with a consistent Yoga Nidra practice, you will begin to become more awake and aware to all of these different states and that which they arise from.

Let me know if you learned something new in the comments below!

And please know that I have many colour schemes of this illustration below! Please feel free to pin them to your Yoga or Meditation Pinterest Board! If you share these graphics anywhere, please always be sure to link back to this blog post! 🙂 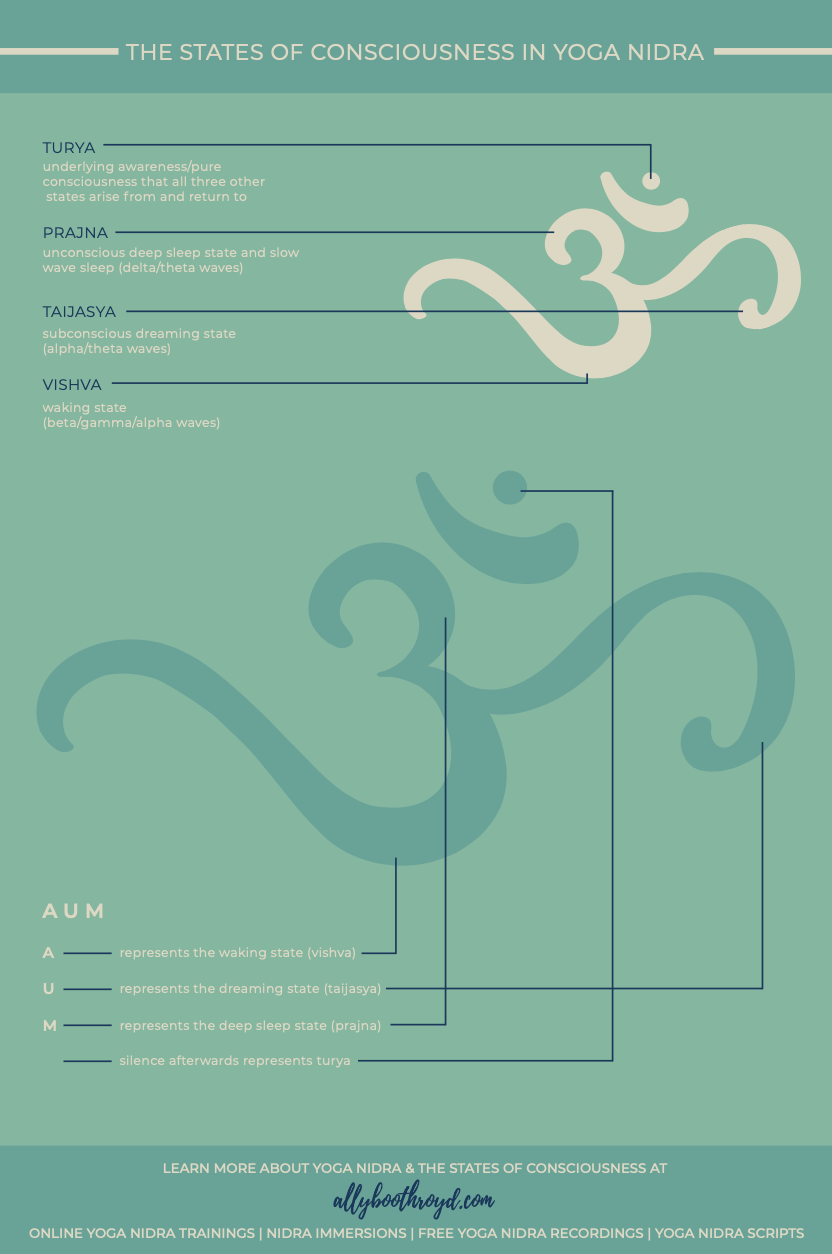 Ally Boothroyd is a yoga educator and meditation teacher with a passion for yoga nidra and the healing power of conscious rest. She is the founder of Sarovara Yoga, a yoga space and women's retreat centre in Ontario, Canada. A sanctuary on the water where she fosters local community and supports health, personal growth, emotional resiliency, authenticity, awareness, and awakening. Ally also leads Retreats and Yoga Teacher Trainings in Nosara, Costa Rica

How To Create Yoga Props At Home 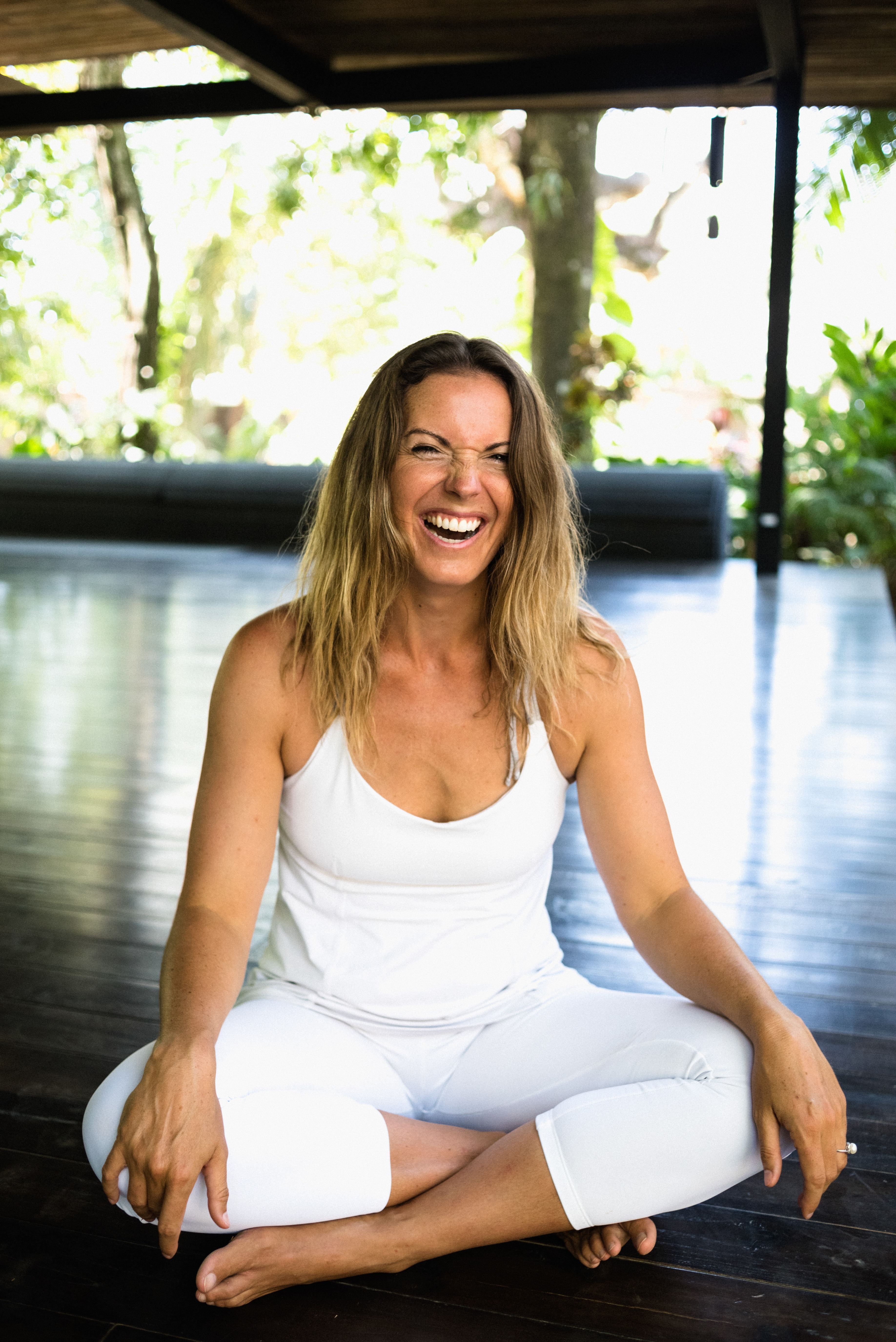 Hi There! Welcome to the Free Resource Library. Here you will find some of my all time favourite tools and practices to keep myself feeling grounded, peaceful & safe. These tools straight up make me a better mom, a more patient wife, a more authentic teacher and a more compassionate friend. I hope you find these resources as helpful as I do and I hope to connect with you in the comment section on this library. Namaste.

Join thousands of other awesome subscribers on Ally's Youtube channel

I Love Hearing From You!

Practice with Ally and join over a million meditators on the largest free library of guided meditations on earth.

Please log in again. The login page will open in a new tab. After logging in you can close it and return to this page.